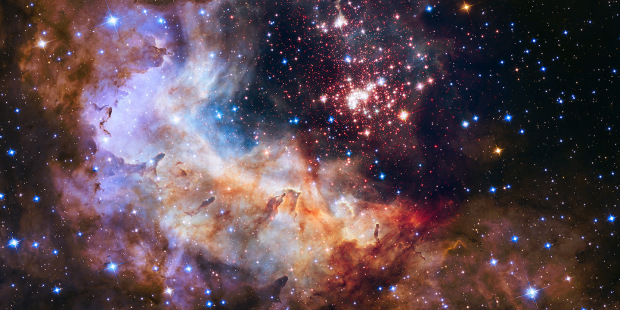 God created the universe. He created a perfect place for prosperity and happiness with accountability.

When he shared his freewill, he simultaneously created souls-spirits (eternal) with freewill and other corporeal life forms with intrinsic freewill as well and he infused this new creation with the delicate ingredient of emotion. Freewill and emotion are two powerful forces in this universe which nourishes and destroys.

God created the spirit world, time, then mass, gravity, space, and dimensions. To all the sentient beings he gave freewill. Energy in the spirit world is intrinsic with each soul. In the corporeal realm, energy is the product of gravity and mass. That’s the simplicity of the universe.

How God created the universe is the playground of theorists. What everybody seems to agree on is that there is Time, Randomness, Matter(mass), Space, force, gravity and even dimensions. Then there are theories of the opposites and multiverse.

Gravity sustains all over the universe, even in open space because energy travels though space and occupies everything and energy has mass. The universe is in perpetual motion and motion generates vibrations and vibrations generate energy. The eternal trinity: Mass, Gravity, Energy.

This “emptiness” is what holds the universe together and it is entangled with the spirit domain where everything is connected and intertwined. The soul (conglomerate of thoughts) of the sentient being dwells in the spirit realm where it is not confined, restricted or limited by matter(mass), space, gravity, or dimensions. Mass, Space, force, gravity and even dimensions are the perception of sentient beings in the corporeal world where energy is utilized to accomplish anything and everything. In the spirit world, none of these are essential. Will power and emotion are the two essential forces from God that allow the spirit world to be vibrant with life.

Within this universe God created a LIFE force, spiritual and corporeal and along with this came FreeWill. Everything that God has created can be destroyed, only two things will remain unimpaired: Time and Freewill.

Time is the past and the future which hinges on the present. There are all kinds of theories out there about bending space and time but that’s all they are, theories. There may come a time through the advancement of science and technology that humans may be able to manipulate and bend space and time. Bend space so as to almost touch the other side and make traveling no longer time consuming. Bend time so as to make the passing of time faster or slower in pockets of space. But never leaping from the present to the past or the future.

Neither can anyone visit the future. Humanity’s future is literally only one heartbeat away. The future is simply variables of probabilities that hinge on randomness and free will within the present. The future out there in the galaxies where the freewill is not involved depends solely on randomness.

The future is not “written in the stars”. It is yet to come whether it depends on randomness or free will. A person can certainly predict the future for a specific personal act. Such as the act of swallowing water. Only one free will is involved here and that is his. As soon as more people are involved in a decision making, the future becomes vague. Now, when you combine this with randomness, it becomes almost an impossibility. However, with the development of future quantum computations predicting the probabilities of what is about to happen may be manageable but it can never be as dead set as the past.

An ordinary person can predict the outcome of a group’s decision if the opinions of the group is known to that person ahead of time.
Just as I know that the sun will show its full glory tomorrow early morn because I know about the rotation of the earth on its axis every 24 hours. I did not see the future, I simply predicted it.
An individual who has the gift of feeling and interpreting the resonance of thoughts, images, emotions and vibrations of the universe can unequivocally surmise the future.

The Universe is a perfect place for our need to explore as God created it and the future certainly depends on randomness and the conglomeration of humanity’s freedom of choice. All of God’s creation is wrapped around time. He is omnipresent. Even for God, the future is only what is to be. It hasn’t happened yet.

Free will is the gift from God. This is what helps make the unpredictability of the universe manageable. Freewill is what makes the universe fascinating.

Religions write about prophecies (what is to come) or about the “End of times”, “Armageddon”, “Judgment day”, “New beginning”. Many believe them to be true. They believe in predestination, yet they also believe in “freewill”. Now this contradict each other. A prediction for one’s action may come true unless deterred by randomness or the “freewill” of another. Since freewill is an unchanging factor in the universe, therefore there is no predestination. However, the enlightened (good or bad) spirit who can wield the energy of the corporeal and spirit world may reveal their intentions to sentient beings and make it so to be passed on down as “prophecy” or “revelation”. Powerful they may be to cause their will (intention) to be materialized in the future, but it remains only as a possibility because the “freewill” of another powerful spirit may interfere. Freewill and Randomness will forever be there to change things up.

Also there is no “OMNISCIENCE” (know everything including the future). God is attributed with absolute omniscience by all religions. God’s absolute power to do and create whatever he “wills” is confused with omniscience. There is no future to “see” but there is a future to be created. The will of God can plan (“predict”) that a galaxy will be created because he will make it so. The galaxy “was” not there in the future. It was not there to be seen. When God gave his sentient creation “Freewill”, he gave it without limitation. Freewill and randomness are the unknown factors. God can control and manage randomness but not the freewill of his creations. He can destroy “freewill” and take it all away from his creations, but God created perfection so he will not take “freewill” away. Without “freewill” there is no perfection.