Religions and ideologies must be kept separate from Government 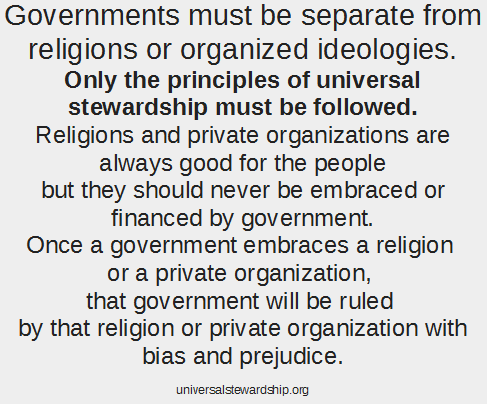 Universal Stewardship does not advocate any government or any religion. However, we do insist that government must be kept separate from religions or any ideologies. We ask our followers to do their duty to God, their religion and their country and follow the principles and the guidelines of universal stewardship.

The order of things are as follows: God, self, country(tribe), religion(ideology). Let us not ever forget that. Universal Stewardship is not about religion or country. It is about God’s creation.

As mentioned by the founder of Universal Stewardship, Franklin H. Maletsky, “Let there be freedom of religion, but keep religion separate from government. A country that bows down to the laws of religion will one day be governed by religion.”

Religion preaches unity among their members and  tolerance towards non-members. Outsiders are not part of the fold and must be tolerated until the day that they are converted over.