Government must have no emotions 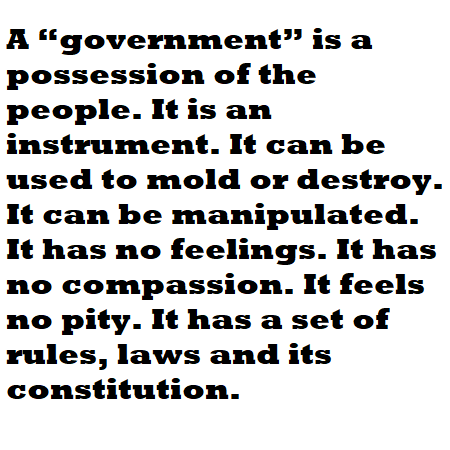 Government[1] must be and always be of the people, by the people and for the people. Government[1]  unifies the people under law. These people are the citizens and legal residents of the country which is governed. A “government” is a possession of the people. It is an instrument. It can be used to mold or destroy. It can be manipulated. It has no feelings. It has no compassion. It feels no pity. It has a set of rules, laws and its constitution. The people elected to run or wield this powerful unemotional instrument must follow the set of rules laid down and never let their personal emotions get in the way.

The duty of the government[1] will always be to protect its property, possessions, citizens and legal residents first, everyone else comes second and only if they form an alliance with “quid pro quo” not to the leaders but to the nation who seeks the help or alliance. It is the duty of government[1] to provide free healthcare and education to its people. Healthy and educated legal residents and citizens give prosperity to the nation. Without them the country won’t stand a chance to protect itself and prosper. Government[1] must always strive to improve upon what it has. Always striving to improve its system of security so no other nations or organizations  can attempt to undermine it or conquer it from within or without.

The government[1] must always protect its borders. However, it should always welcome immigrants, refugees, and asylum seekers after proper vetting is done. For the influx of refugees, it will maintain immigration processing camps. Those who comply will be allowed residence and those who fail the vetting or who complain about the process will be sent back to their country.

A child responds better on a full stomach. A child learns more when he/she is not hungry. A child is happier on a full belly. It is easier to learn RESPECT & KINDNESS on a full belly.
We are non-political, non-religious, and not affiliated with any special interest groups. Please Click on the "donate button" below and you will be directed to the paypal donation page. Thank you for your Support.